Anxiety is a normal response to stressful life events such as moving homes, changing jobs, or facing financial difficulties. In fact, many people experience anxiety at some point in their lives. However, when symptoms of anxiety worsen than the events that triggered them and begin to affect your way of life, it could be a sign of anxiety disorder. The symptoms can be debilitating, but with proper care from a medical professional, you can manage them and live a normal life. In this guide, we look at the first symptoms of anxiety disorder in children and adults. Recognizing the symptoms of anxiety disorder is the first step to sustainable management. Stress and anxiety are becoming more prevalent and noxious in young children. But, it’s also true that moderate anxiety can actually help children push themselves to succeed both at home and in school. It is fairly normal to feel anxious when taking a test or engaging in a sporting activity. You should also expect children to feel nervous when visiting a doctor’s office or when faced with a new life situation.

However, when children feel worried all the time or their level of anxiety is disproportionate to the underlying situation, there might be a bigger problem: anxiety disorder. Early symptoms of anxiety disorder can take many forms and impact kids in different ways, including:

This condition causes children to experience pervasive, unwanted worries or obsessions. Sometimes, they may strive to relieve this anxiety through trivial physical or mental behaviors known as compulsions. For many kids and teens, common obsessions include fear of dirt, germs or contamination, religious obsessions, a need for symmetry, precision, and order, and obsessions with lucky and unlucky numbers. Other symptoms include:

Compulsive rituals are also common among children and teens with OCD. Symptoms may include:

Panic disorder is often characterized by the sudden onset of intense fear, followed by weeks of worry about facing a similar attack. Common symptoms include a racing heart, difficulty breathing, a sense of danger or doom, sweating, chest pain, and a need to escape.

Finally, kids with anxiety disorders may exhibit specific phobias. For example, they can have persistent, over-the-top fears of certain objects or situations that are beyond their control and significantly impact their lives. Common phobias include heights, insects, dogs, and loud noises.

If you notice several of the above symptoms, ask your child’s doctor to carry out an in-depth screening of his/her mental and physical health. This will help to rule out attention deficit hyperactivity disorder (ADHD) and mood disorder, all of which can manifest like generalized anxiety disorder (GAD). Certain physical conditions, such as heart conditions and thyroid disorders, can also mimic anxiety-like symptoms. With simple blood and urine tests, your doctor can rule out most of these conditions. 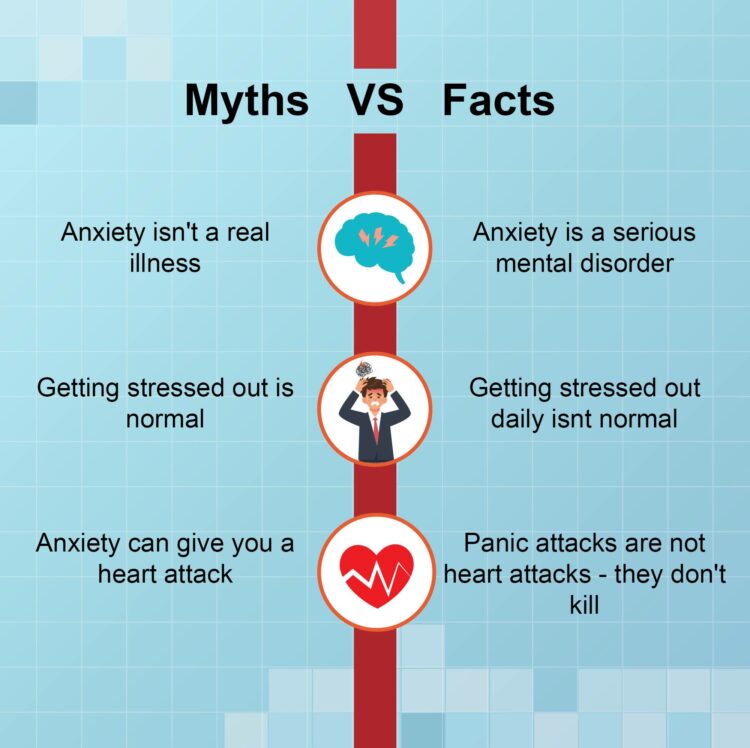 For adults, common symptoms of anxiety disorders include:

The worrying associated with anxiety disorders is usually disproportionate to the events that trigger it and often occurs in response to normal, everyday situations. If the worries occur on most days for at least six months and become difficult to manage, they could be a sign of generalized anxiety disorder. The worries are often severe and intrusive, leading to difficulties concentrating and accomplishing regular tasks.

When someone feels anxious, part of the sympathetic nervous system goes into overdrive, kicking off a cascade of effects throughout the body. The outcome can be a racing pulse, shaky hands, sweaty palms, and dry mouth. The symptoms occur because your brain registers that you have sensed danger and prepares your body to react to the threat. Your body typically shunts blood away from the digestive system and toward the muscles in case you need to fight or run. It also heightens your heart rate and beefs up your senses.

Becoming easily fatigued is another common symptom of generalized anxiety disorder. For some people, fatigue can follow an anxiety attack, but for others, the fatigue can be chronic. It’s still unclear whether this fatigue is a result of other common symptoms of anxiety, such as muscle tension or insomnia, or whether it is related to hormonal effects of chronic anxiety.

People with anxiety disorders may have tense muscles on most days of the week. It is possible that muscle tenseness can increase feelings of anxiety, but it is also possible that excessive anxiety can lead to increased muscle tenseness. Interestingly, having muscle relaxation therapy can help reduce worry in people with anxiety disorders. Some studies even show that muscle relaxation therapy is as effective as cognitive behavioral therapy.

Anxiety disorders are strongly associated with sleep disturbances. If you often wake up in the middle of the night and have trouble falling asleep, it could be a sign of anxiety disorder. Some research indicates that having insomnia during childhood increases your likelihood of developing anxiety later in life.

In another study that followed nearly 1,000 children over a period of 20 years, it was found that having insomnia in childhood increased the risk of developing an anxiety disorder by 60% by age 26. And while insomnia and anxiety are closely related, it is unclear whether insomnia causes anxiety or whether anxiety contributes to insomnia or both. However, what is known is that when the underlying anxiety disorder is managed, insomnia often improves as well.

Another type of anxiety disorder is referred to as panic disorder and is often associated with recurring panic attacks. Typically, panic attacks cause an intense, overwhelming sensation of fear that can sometimes be debilitating. The extreme fear is often accompanied by rapid heartbeat, shaking, sweating, chest tightness, shortness of breath, nausea, and fear of losing control or dying.

Panic attacks can also happen in isolation, but if they frequently and unexpectedly reoccur, they may be a symptom of panic disorder. It’s estimated that 22% of American adults experience a panic attack at one point in their lives. However, only about 3% experience these attacks frequently enough to be considered a panic disorder.

When to Seek Professional Help

Symptoms of anxiety disorder can be debilitating, and that’s why it’s important to seek professional help when you experience severe symptoms. If you feel anxious the majority of days and exhibit one or more of the above-listed symptoms for at least six months, it could be a sign of anxiety disorder. Seek the help of a licensed psychologist and psychiatrist with the training to treat anxiety disorders through a variety of therapies. This may include anti-anxiety medications, cognitive behavioral therapy, or natural therapies. Working with a professional can help you better manage your anxiety and minimize the symptoms as fast and safely as possible.

Sara Anderson is the head of content for the EzCare clinic, a medical clinic that provides world-class health care services. She has been associated with the health care industry for 10+ years and specializes in health care and medical content.